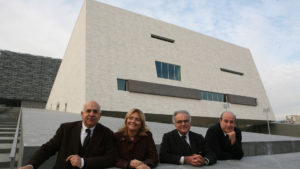 The ABDR Architetti Associati Studio, which is based in Rome, was founded in 1982 by Maria Laura Arlotti, Michele Beccu, Paolo Desideri and Filippo Raimondo. The Studio’s activity combines professional practice with educational programs and scientific research, which are showcased through monographs as well as national and international publications. The studio has represented Italian design on many occasions (i.e. Expo Shangai 2010) and obtained numerous prizes and awards (the EuroSolar award for bioclimatic architecture in 2003, the “Europe & Africa Property Awards” award in 2010, the honourable mention at the Gold Medal for Italian Architecture in 2012, the nomination at the European Union Prize – Mies Van Der Rohe Award in 2013, and the Inarch/ANCE national award for Florence’s New Opera House in 2014).
The main works that have been and are being carried out by the Studio include: the new Casablanca high speed railway station, the new Roma Tiburtina high speed railway station, Florence’s new Opera House, the Classic Opera and Ballet Theatre in Astana, the renovation of the Reggio Calabria National Archaeological Museum, the requalification of the Giustiniano Imperatore urban area in Rome, the stations of the B1 branch lines of Rome’s Underground, the renovation of Palazzo delle Esposizioni in Rome, the reconstruction of Serra ex-Piacentini, the Barletta pedestrian axis, and the enlargement of the Sibiaritide Archaeological Museum.