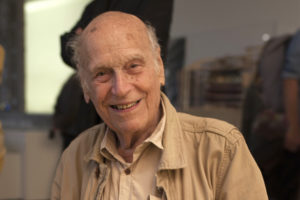 (Budapest, 1923) is a Hungarian-born French architect. Starting in 1958 with his Manifesto de l’Architecture Mobile he has formulated and championed the idea that the inhabitant should be the sole conceptor of his own living premises within a spaceframe structure that would allow individual variations. His theory influenced avant-garde groups like the Japanese Metabolists, Archigram and many more. His manifesto was followed by more than forty books and hundreds of articles in Europe, America and Asia. His projects for the Ville Spatiale (Spatial Town) concept of space frame architecture were considered utopian, until the building of the “self-planned” Lycée Henri-Bergson in Angers in 1980 and many other smaller projects, showed that he is actually a realist, merely critical of mainstream architecture.